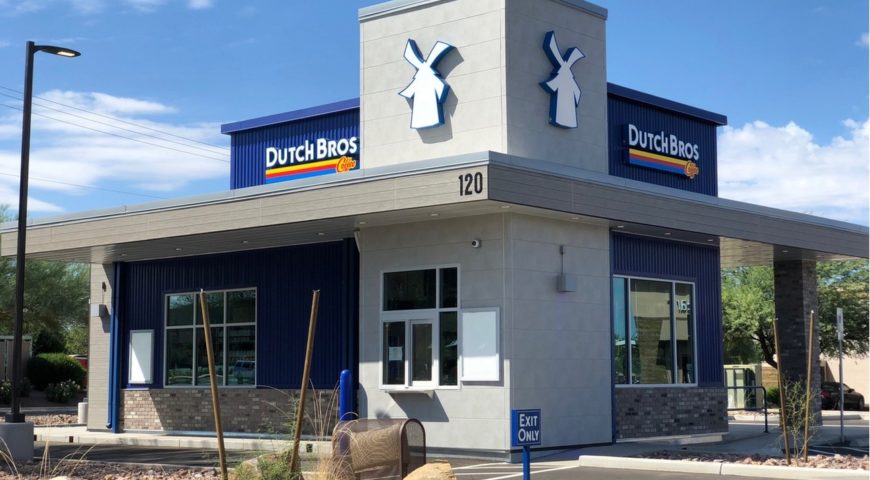 TUCSON, ARIZONA – Dutch Bros Coffee Drive-Thrus in Tucson are fetching well over $2,000 per square-foot as these three transactions from last month demonstrate.

Brenna Lacy of VOLK Company and Jesse Rozio, Greg Saltz and Marty Olejarczyk (Marty O) of GPS Comercial Advisors represented the developer, Sage-Grant Tucson, LLC in the sale of a newly opened Dutch Bros Coffee at 4621 East Grant Road for $1,976,376. The 858-square-foot building with drive-thru  closed at $2,303 per square-foot.

Phoenix Commercial Advisors facilitated the sale of a single-tenant Dutch Bros Coffee. The property, located on 1.04 acres on the southeast corner of Mission and Valencia roads at 1971 W. Valencia Road, Tucson, Ariz., sold for $2,068,000. The brand-new, 824-square-foot building with drive-thru closed at $2,510 per square-foot.

Danny Gardiner and Chad Tiedeman at Phoenix Commercial Advisors represented the seller in the transaction.

“This brand-new Dutch Bros closed quickly and at a strong price per square foot of $2,510, said Gardiner. “The property has a lot of factors working in its favor—the visibility, healthy traffic counts and a retail-strong intersection.”

Selling at an even stronger price was the new Dutch Bros at 3901 East 22nd Street in Tucson. Dutch Bros opened at this location in February of this year. The 810-square-foot building, the site of a former Shell Gas Station, sold for $2,275,000 or $2,808 per square-foot in this all-cash deal. The investors were Michael and Donna McClaskey of Portland, Oregon and the seller was Cole Valley Partners, LLC (Zach Bonsall, managing member).

“GPS Commercial Advisors is proud to represent Dutch Bros Coffee throughout the State of Arizona, ” said Rozio. “Tucson is already recognized as one of their best markets. More to come…”

Dutch Bros Coffee is the country’s largest, privately held drive-thru coffee company, with 389 locations and 12 of these in the Tucson area. The company employs 12,000 people in 7 states. But growth hasn’t taken the company away from its roots. Dutch Bros still gives away drinks — now over one million each year — to further the bros.

This April, Dutch Bros Coffee donated 100 percent of profits to medical first responders on the frontlines of the COVID-19 fight through #FirstRespondersFirst.